We recently returned from a full week of “vacation.”  I put “vacation” in quotes because while I successfully took a week of vacation from my actual work, we spent the week doing work for F.O.P. (Fibrodysplasia Ossificans Progressiva, a condition impacting 1 in 2 million where muscles and other soft tissues turn to bone, progressively restricting movement until older patients are essentially locked in place.)

Our first stop was California, to enroll Sienna in the FOP Natural History Study.  This study is being fielded by Clementia Pharmaceuticals (who is also currently fielding a drug trial for patients having active flare-ups), and Clementia has agreed to share their data with the IFOPA, which will help everyone studying F.O.P.. A Natural History study is important for researchers to understand the natural progression of the disease, and to help guide ongoing drug development in FOP.

We had been waiting for months (actually, nearly a year now!) for an east coast center to open for children, and finally just decided to visit UCSF and tie in a family visit as well (my sister and her family live outside of SF).

Here is Sienna on the trip out, flying in style! 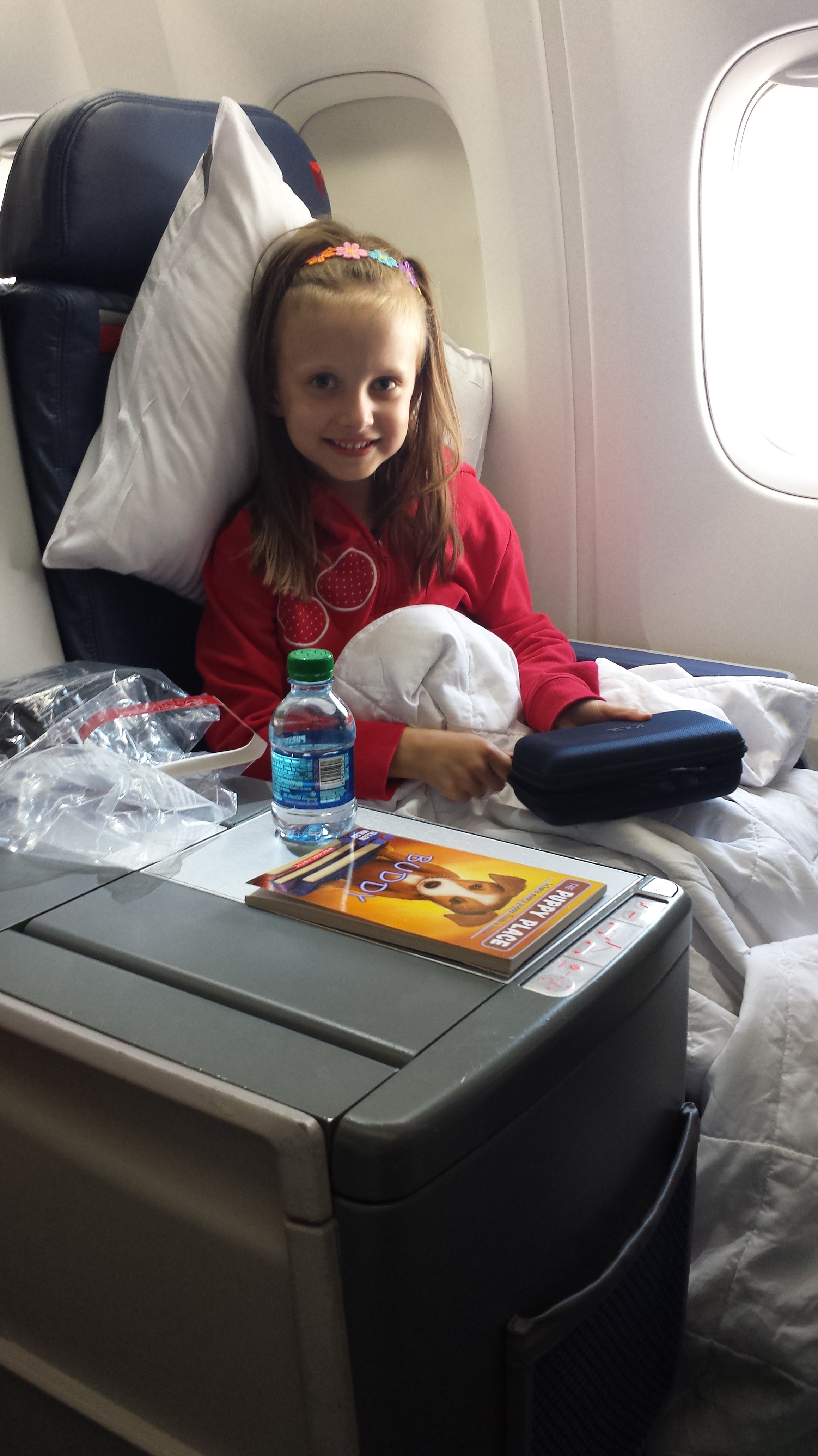 Sienna had a great time with her California cousins and also hit a new milestone while swimming with them.  She has been able to swim short distances for a while, but her limited range of back and neck motion makes it a little tricky for her to take a breath and keep going – her bottom always sinks when she tries to get a breath.  But I knew she could get there, and finally she did!  (pictured below during the process – she launches herself off my knees and paddles as far as she can).

Then on Monday morning, we headed into San Francisco to enroll in the study at UCSF.  In the waiting room, we had the pleasure of meeting AJ, a sweet little boy with F.O.P. from New Jersey.  We traveled cross-country to meet someone who lives just a couple of hours away!

Then we got down to business.  The study began with lots of paperwork.  The researcher kindly explained everything that they would be doing, which sent Sienna into a panic because it included a blood draw.  We had warned the researchers in advance that Sienna would have trouble with the idea of a blood draw, but that we’ve always been successful when we’ve had to get blood from her in the past.  The trick is to not give her time to stew over it, and just get it done quickly.  I suggested that they schedule it for the end of the day, but they weren’t able to make that work, and had it scheduled for mid-morning.  However, telling her that it would be coming threw off the whole morning, and she promptly shut down and refused EVERYTHING.  EKG?  NOOOOOOOO!  Urine sample? Aieeeeeeee!   Saliva sample?  Eeeeekkkkk!    Want to just try that blood draw?  NOOOOOOOOOOOOOOOOOOOOOOOO!  (meanwhile, our new friend AJ across the hall stopped by and showed off his cool band aid and complete cooperation in his study.  He even told Sienna that it didn’t hurt to try to help calm her down.  He is 5!!  I couldn’t believe it.  Amazing kid!)

One researcher was able to break her cycle of “no’s” by bringing in a toilet pan and calling it some silly name like a “pee pee hat” and sticking it on her head, which made Sienna laugh and finally be willing to try something.  By lunch, she was able to provide a urine sample, a full physical therapy evaluation, and an interview, but she never gave in on the EKG (despite myself, rare dad, and the researcher demonstrating that they are “just stickers” by sticking them on our faces and hands. Sorry, no picture of that one!) or blood sample.  Sigh.  Rare dad and I gladly gave our blood, but who knows how useful it is to them without Sienna’s.  Hopefully next time we can better set her up for success.

We broke for a much needed lunch, including this crepe: 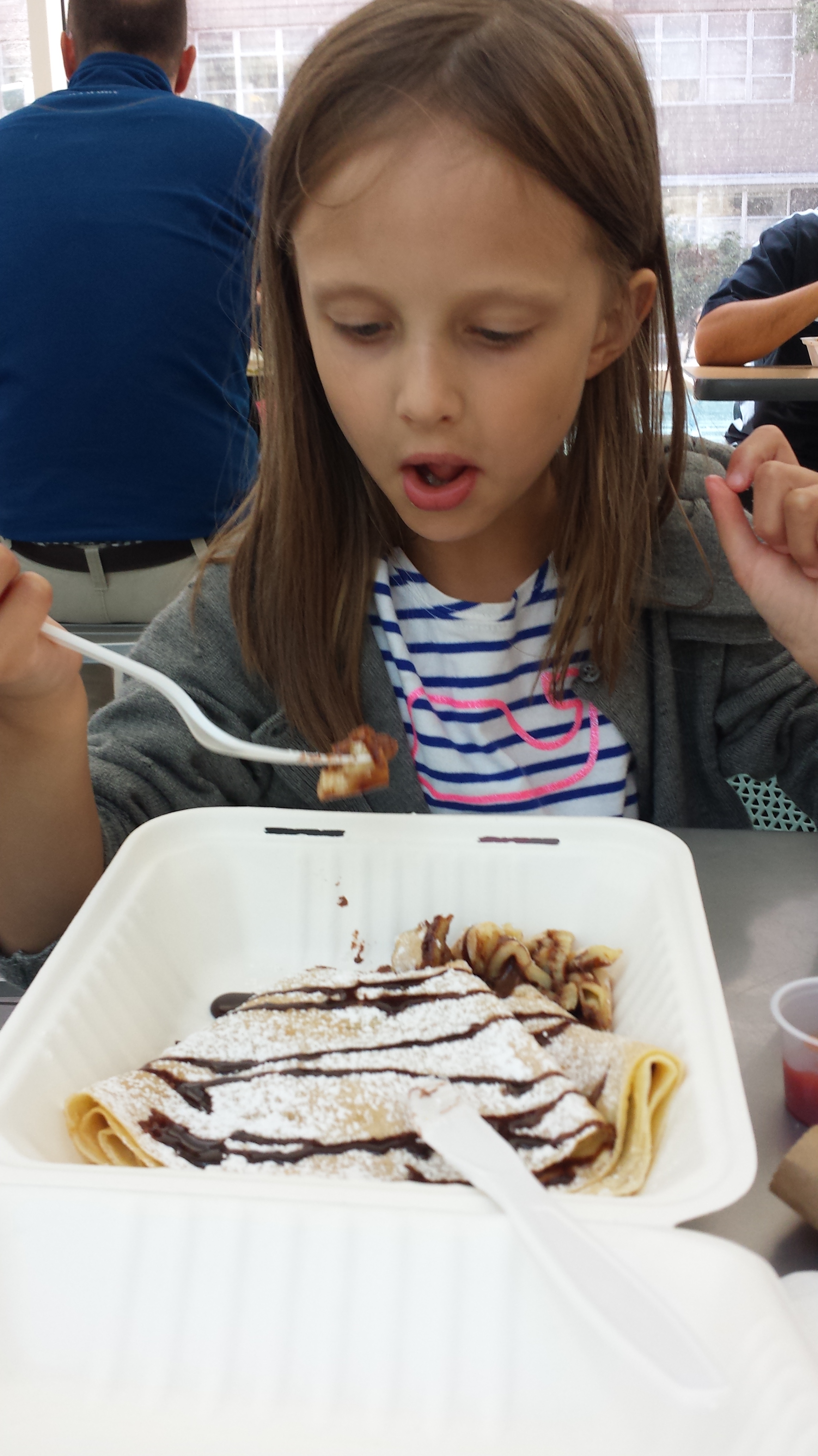 And visited the hospital gift shop to buy her a bribe (this puppy):

After lunch, she had two remaining appointments, a CT scan and a pulmonary evaluation.  The CT scan was immediately post-bribe, and the CT scan operator let Sienna run the machine on her puppy first, so that one was a huge success – turns out Sienna is much better at conducting research than participating in it! 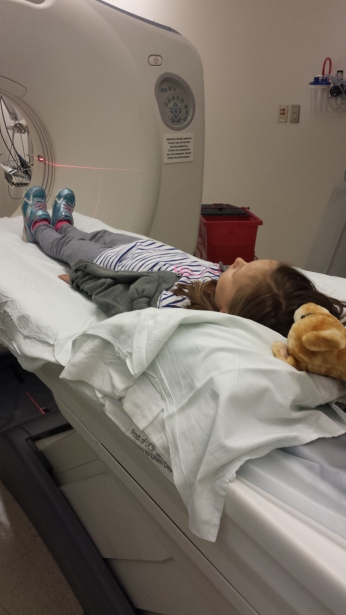 We then had a three hour wait until the final pulmonary appointment, so we went for a walk and sat outside until we were frozen solid. (Which was probably 4 minutes. Mark Twain was right about San Francisco in summer!).  After the long wait, the pulmonary appointment was fortunately another success – and only took about 5 minutes.

After that, we checked in to the hotel and popped out for a quick dinner.  I asked Sienna if she wished she could have stayed at the hospital longer and got this reaction:

(Yes, that’s a knife.  But thankfully just a butter knife).

After dinner we took a couple of san fran-selfies and went on our way: 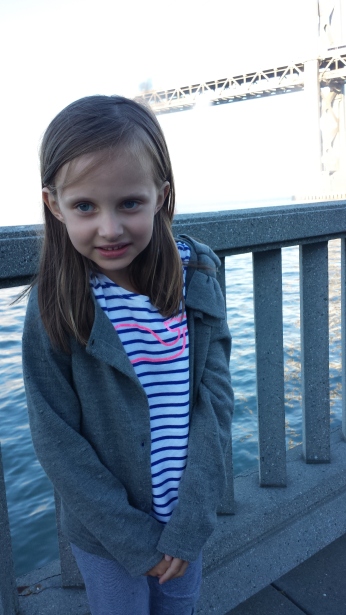 Unfortunately that dinner gave me food poisoning and I was sick shortly after this picture – no wonder Sienna looks so suspicious of me!

Tuesday was a full travel day, leaving SFO at 8am and landing back in NY at 5pm.  We had a night at home and then woke up early Wednesday morning to drive to Boston.

I have been fortunate to serve on the board of the IFOPA, the 501(c)(3) non-profit dedicated to funding research, finding a cure and supporting families, for the past two years.  This week was a strategic planning meeting in Boston where a group of current and former board members gathered over two days to talk about our priorities for the next 3 years.  We had some great discussions and I really like our extended FOP family – great people, great meeting!  It is an exciting time for us with two companies fielding clinical trials and hopefully even more to come.  An official report out on the meeting will come soon from the IFOPA.

But I can write about Sienna’s experience and the non-meeting details.  The drive to Boston was fairly uneventful, just the usual 84 potty stops.

We got to the hotel in plenty of time to drop our bags off and for me to make sure Sienna got some lunch.  However, I couldn’t find a taxi so I sprinted 30 minutes to the meeting location and walked in with three minutes to spare!  A success except for the sweat that poured down my face for the first 20 minutes of the meeting.

Rare Dad took Sienna sightseeing while I was in the meeting Wednesday afternoon. After a full bus tour, when I asked her how it was, Sienna told me “I saw two cemeteries.” I think the significance of Boston history was a bit lost on her since she’s 6 and hasn’t covered any of it in school yet.

We had a nice dinner at the hotel with the rest of the team, where Sienna stayed up past her bedtime and got silly, eating extra dessert and declaring that she was still on California time.   Thursday at 5am I woke up to Sienna laughing hysterically.  I thought for sure we were in for an early wake up/ cranky Sienna, but it turned out she was laughing in her sleep.  Adorable!  And she kept sleeping until about 8am.  I had to get up for the meeting at 7 so I tiptoed into the bathroom and was out the door before she was even awake.  But while I was meeting, she enjoyed this breakfast feast in bed:

And then Sienna and Rare Dad had another good day on Thursday – I can’t share details but it involved science experiments – and we all drove home, exhausted!

That would be the end of the story, except as soon as we crossed into New York, panic hit me.  Did we pack up Martha, Sienna’s most beloved stuffed chihuahua?  After a round of “not me’s” I called the hotel and explained the situation.  Thankfully, it turned out that the housekeeping staff recognized that she was a well-loved family member and saved her, and Edward in security located her and sent her to us right away.  Thank you, Langham hotel staff!  Martha arrived home today and now it feels like our working vacation is finally complete!  (don’t mind the unpacking mess and dog bed in the background – just look at that reunion of pure joy!) 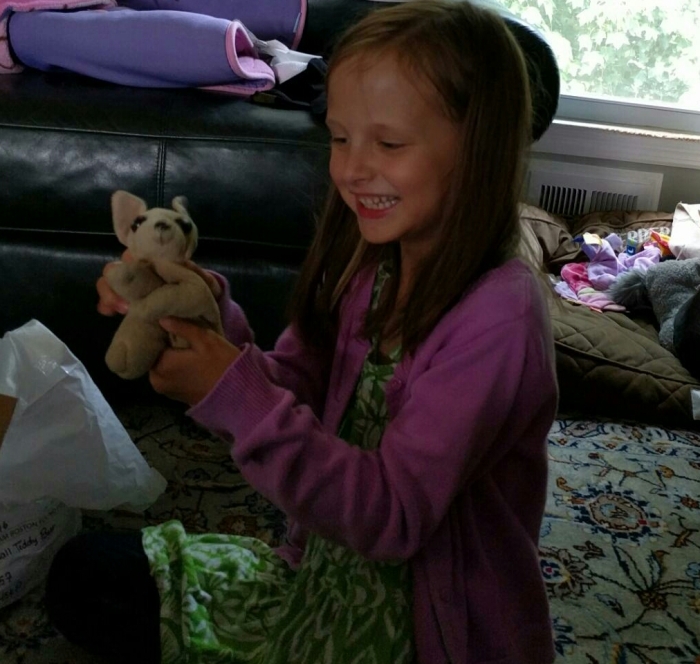