The dog days of summer started strong with a set of puppy visitors from Guiding Eyes for the Blind! And not just any puppies, but puppies from our neighbor’s dog, a Guiding Eyes breeder and all around super dog.  Hosting puppy visitors is always special (though exhausting!), but this time set a new standard.  Sienna was thrilled, and their mommy was allowed to visit with them as well. She was so happy to see her babies!

However, less than a week later,  Sienna was with our brand new au pair and had a bad fall, slipping shoulder-first onto the stairs (that was that au pair’s last day of work, by the way). Any injury is scary given Sienna’s F.O.P., but an injury on or near a joint is especially panic-inducing. Injuries can trigger F.O.P. flare-ups, where muscles and other soft tissue can turn to bone, causing joints to permanently lock in place.  Surgery cannot unlock these joints because the body would register that as an injury and grow the bone back with a vengeance, worse than before.  It sounds like science fiction but it’s true, F.O.P. is the only known condition where one organ system transforms to another.

There are currently no approved treatments available to treat F.O.P., so we felt helpless at first.  But fortunately there are a few tools in our arsenal today. Sienna takes daily medications to help prevent symptoms (an anti-inflammatory, a mast cell stabilizer, a leukotriene inhibitor), and in an emergency such as this she takes prednisone, a steroid anti-inflammatory. I got home from work about 10 minutes after Sienna’s fall and her shoulder had already started to bruise so I decided it was definitely time for Prednisone.  However, when I got out the bottle the instructions struck me as wrong. I was in a panic, but I knew the FOP emergency dosage was by weight of the patient.  For some reason our supply said 1 teaspoon per day, which made no sense at all.  I searched google and hit a dead website link, but thankfully our FOP support Facebook group came through with the correct dosage instructions within just a few minutes, and emails to her team of FOP specialists were returned later the same evening.

The next couple of days consisted of holding our breath and watching for swelling. Thankfully, one set of Sienna’s sweet cousins were in town and helped distract us from our panic. But in every activity – swimming, playing in the sand, doing crafts – Sienna was not using her left arm at all, which made us fear for the worst.  What if she could never lift her arm again? What if her shoulder was permanently locking in place?  With F.O.P., there’s no warning. You don’t get to have a “last time you raise your arm” ceremony.  You just wake up one day with a painful flare-up and the motion is gone. Forever.  Some of the most heartbreaking and powerful accounts I’ve heard from our older F.O.P. friends are about how they haven’t touched their face, or been able to do x, y, z in years.

After more consultation with the specialists over the weekend, they determined that Xrays were in order.  Sienna wasn’t thrilled, and said the price of x-rays was for her to get to be the boss of me all day.  I agreed, because how is that different from any other day, really? 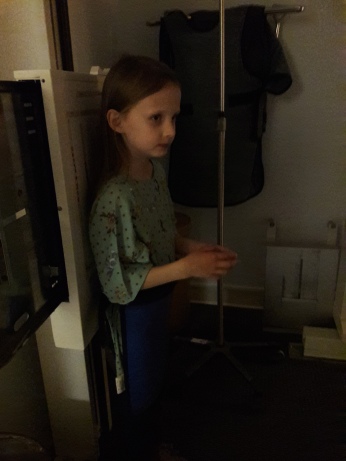 Here she is, the ideal patient, and likely plotting the rest of her day as boss.  The Xrays showed a clavicle fracture, which was apparently a best case scenario since the shoulder was not impacted.  The treatment is a sling for a few weeks, ie most of summer (goodbye, summer swimming, riding the new pedal car, and goodbye puppy socialization until the bone is healed 😦 ).  While annoying, it’s not bad at all considering what we were worried about. We also learned that a break of “native” bone (non-F.O.P. bone) is often ok. You just have the issue of the break itself, without typically causing F.O.P. complications.

Once we had the xrays, we needed to share them with the team of specialists who follow Sienna. Sienna is part of a multi-year F.O.P. Natural History Study, so X-Ray images and careful documentation are very important and useful to them. At radiology they said “sure, no problem, here’s the CD.”  I had to clarify that her specialists aren’t local – Sienna is followed by F.O.P. specialists at U Penn, UCSF and is also in touch with one at the Mayo clinic. We got a few raised eyebrows, as if they were asking “who IS this kid?!”  Sienna definitely doesn’t understand how lucky she is to have such great teams working on F.O.P.
Later that day, Sienna also had an exam via Zoom video chat with Dr. Ed Hsiao at UCSF, the lead investigator in the Natural History Study.  Since Sienna is participating in the study, she would need to travel asap if she was having a flare-up.  Luckily he agreed that she wasn’t showing signs of a flare-up, so it was back to our day.

The rest of the day consisted of a visit to the toy store, a visit to Target, and many requests from “the boss”:

“my feet aren’t being rubbed!”
“more back tickling!”

It was then that I was happy to see that despite the fractured bone, her spirit was intact.
By now Sienna has completed her course of prednisone, a full two week taper, and still no swelling.   And she was a champ through it all, never complaining once.  She even said it tasted good.  Although she did complain / is still complaining about the sling. She is still a kid after all…  But we’ve done our best, letting her decorate it with colored tape and eventually finding a snoopy one. 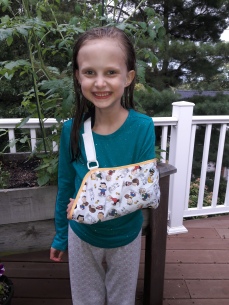 So far the prednisone’s only side effects have been increased appetite (one night half a rotisserie chicken, one lunch three bowls of soup, every night a full bowl of vegetables) and a little fatigue.

Last night she decided she wanted to take a brief rest at 5pm, put on her pajamas and got into bed.  I jokingly started to sing her a bedtime song and she turned to me and said: “Put a sock in it!”  I started laughing too hard to be mad.  Like I said, spirit intact!
With F.O.P., you are never “in the clear”, but we have passed one milestone and are hopeful that this injury will heal without impacting her motion. This week we go to UCSF for Sienna’s scheduled annual Natural History Study visit.  Wish us luck and stay tuned for more updates!