That saying reminds me of our strategy for F.O.P. – when Sienna’s F.O.P. is quiet, we avoid everything that could possibly disturb it (bumps, bruises, viral illnesses, intramuscular injections). And that strategy has served us well. For 5 years, Sienna’s F.O.P. was essentially asleep.

I never spoke of her streak of good health out loud, for fear of jinxing it.I lived each day with gratitude. But I also lived each day with fear. We’ve watched as friends’ joints have locked up seemingly overnight. I still remember age 1 to 3 for Sienna, almost 2 years of continuous flare-ups. Feeling helpless as huge swellings, sometimes the size of grapefruits, took over her shoulders, neck and back. I still hold my breath every time I help her change clothes, for fear I’ll find a new swelling.

And on February 11th, the dogs woke, all on their own.

At bedtime, Sienna casually mentioned that her left shoulderblade was bothering her. That during the day, it felt like her clothing had a lump in in that wouldn’t go away. My heart dropped and I held my breath as I peeked at it. Sure enough, there was a large swelling. I knew exactly what it was, but I couldn’t believe it, couldn’t process what I was seeing. She had no injuries and hadn’t been sick in ages. It came out of nowhere.

I’d been ready for this for 5 years, but also not ready. Never ready.

There’s not much we can do today for an F.O.P. flare-up. Sienna already takes a few medications everyday to hopefully help prevent flare-ups. And during a flare-up, we add prednisone, a steroid anti-inflammatory, and increase her celebrex, a non-steroidal anti-inflammatory.

Over the next few weeks, the swelling grew and spread throughout the left shoulderblade, up to her neck and under her armpit.

What was different this time from her previous flare-ups is that Sienna is now a very articulate 8 year-old. She can explain what she’s feeling and ask questions. Fortunately she didn’t ask too many questions about what was happening to her, because no one can predict that. Sometimes a flare-up leads to total loss of mobility in a joint. Sometimes it doesn’t. And sometimes it’s in-between. When we ask her FOP specialists if we should/could try something, or if we question a dosage, we get an “ok, that’s reasonable” but never a definitive yes or no. Without an approved treatment available, no one knows what to do. Everyone is winging it. And how do you reassure an 8 year old when you can’t reassure yourself?

Before the flare-up, we had a few activities planned that Sienna was really looking forward to, and we hated to cancel them, so we went about them as best we could.

We had agreed to let Sienna socialize a puppy for Guiding Eyes for the Blind, which she has been doing for two years. We had taken a break after welcoming her brother because we were at capacity. But he had reached 9 months old and was sleeping better (sometimes), and Sienna had just aced a difficult math test so it felt like a good time to start again.

Sienna called Fennel her therapy dog, and I think there’s something to that because her swellings did improve a bit while Fennel was with us.

However, Fennel howled through the night and wouldn’t settle when we checked on her. She woke Alex, and it was a game of whack-a-mole all night, for three nights. Sienna was thrilled with Fennel’s visit, but on top of the stress of her flare-up, that sleepless puppy almost broke us.

Another dog, waking all on its own, was NOT what we needed! 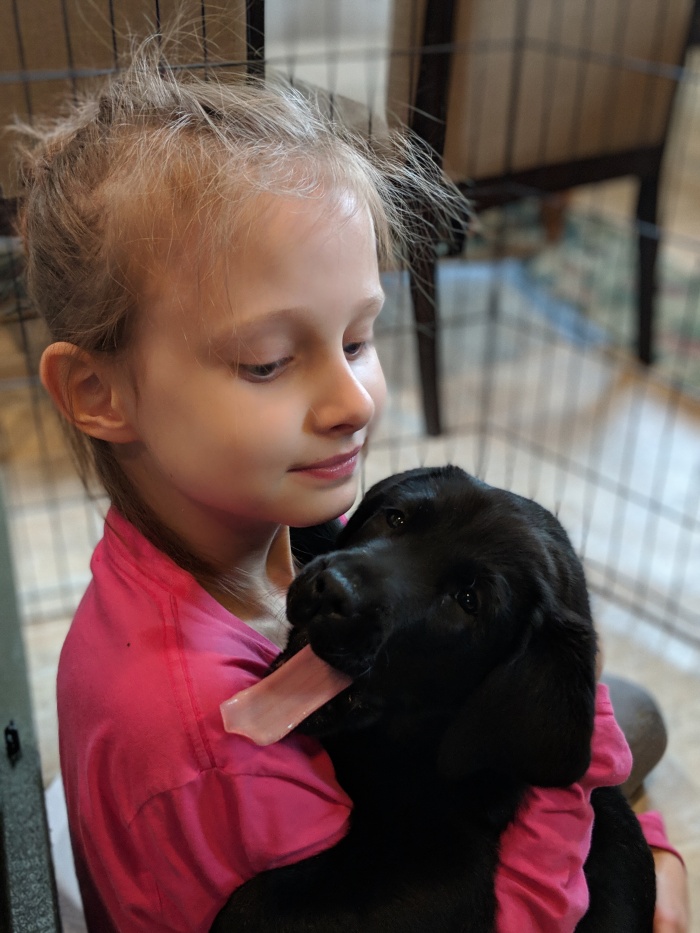 The following week, we visited Blueprint Medicines, a company that has just initiated a phase 1 trial of BLU-782, a promising drug for F.O.P., for Rare Disease Day. It was a 3-hour drive to Boston and the travel did hurt her flare-up a bit. But it was well worth the visit. Sienna learned about chemistry and biology, inspired the team there and had great fun doing it. If you follow her page on Facebook, the visit is well documented there!

Here she is giving her painting to their senior management team!

Before leaving Boston, we also visited Dr. Yu’s lab at Harvard and got to meet the team, as well as see stem cells from Sienna’s own baby teeth, live! Amazing! 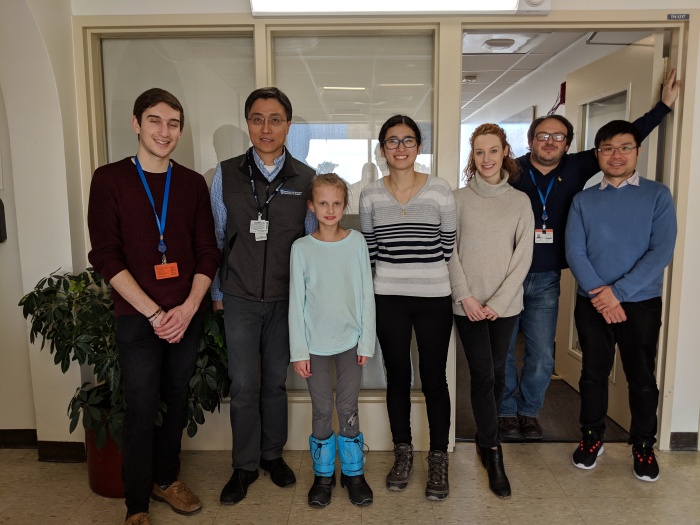 It was an incredible trip that she will never forget. And we did note that if she did have to be having a flare-up, the perfect time to have one is when she could show it to researchers working on F.O.P. Maybe it would spark a new thought or inspire them to work even harder.

After returning from Boston, the flare-up got progressively worse for another two weeks. We re-increased her prednisone (she had previously tapered to a low dose) and it has now been stable for a few days. The shoulderblade is looking better but she still has a large lump under her left armpit, about the size of an orange. She can still reach to the side but she is not reaching up with that arm. We’re not sure if the movement is gone, or if she’s just scared to move it because it’s sore. We’re encouraging her to move as much as is comfortable.

This flare-up has highlighted the urgency with which we need a treatment. It’s not acceptable to stand idly by and watch children lose use of one joint after another. We have been quiet on the fundraising front for several years. But this year, we’re waking ALL the dogs.

We are planning a fundraiser to fund an ACT for FOP research grant, and the funds will all be matched, making them worth twice as much! I will be sharing the fundraiser in the next week. Stay tuned!