As many of you know, Sienna is completing a full marathon between now and the Boston Marathon on April 21st. The Boston Marathon is being run in her honor by Kuber S., as part of Genzyme’s Running For Rare Diseases program. Each week I’m sharing our training progress and sharing the story of another FOP friend. If you are new to this series on our training, you can catch up here:

Tuesday after work, the stars aligned. It was almost 70 degrees (!) and bright out for the first time in months, thanks to the time change. As soon as I got home from work, I popped Sienna in the stroller, grabbed Pepper and headed out for our first weeknight walk of the year!

First, some important background information about Pepper: She thinks she is part sheepdog. On walks, she usually herds the stroller, which means she walks really close to it – at risk of getting run over – and then walks right into it when she decides we should turn. But never when we are actually turning. She looks up at Sienna once in a while to make sure she’s still there, and then, at times known only to her, immediately switches sides to herd the other side of the stroller.

Today, when we got to the park, Sienna asked to get out of her stroller. It always makes me nervous to have her out walking outside of our protected little house, but I balance my nerves about falling with her need to learn and practice. The dirt path in our local park is one of the safer outdoor surfaces for her – softer than concrete anyways – so I gave her the ok and off she went. 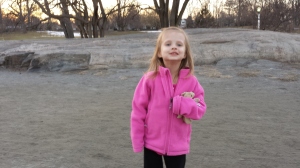 The Leader.
Please don’t pass her.

Eventually it started to get dark, so I got Sienna back in her stroller (to Pepper’s great relief) and we were herded back home.

Sadly, the next day the weather dropped 30-degrees so it was our only weeknight walk.

On Saturday, there was a brief bit of warmth so we went out for a full family walk through the park and lingered for a while to enjoy the views from the sea wall. 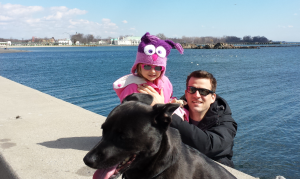 On the way back from the sea wall, we let Pepper off leash in the park, which stresses her out. Pepper is the only dog I’ve ever known who prefers to be on leash. She stays close by us, unless another dog comes within 20 feet. If the dog is at least 3 times her size and not looking at us, she will sprint at the dog at full speed, giving the impression that she is about to eat said dog. The dog will eventually hear Pepper approaching and turn around. As soon as Pepper sees that she has been seen, she will turn around and sprint straight back to us. This usually makes the other dog think it’s a game, so it will follow Pepper back to us, and Sienna gets to make new a dog friend. It usually works pretty well, actually (if your definition of pretty well is letting your child sample different breeds of dog slobber).

I didn’t get any pictures of our new dog friends because when dogs we don’t know are around, I’m usually on alert just in case one of them decides Sienna looks tasty or tries to knock her over.

This week, Kuber had his best week ever, running a total of 41.17 miles, with his Sunday run alone logging 20.24 miles. We are so impressed!!!

Meet Kathleen
This week’s FOP friend is Kathleen, a beautiful and inspirational 18-year-old young woman from Canada. Kathleen lives on a farm, and Sienna is officially jealous. Thank you, Kathleen, for sharing your story!!

At her birth in1993, the difference in her big toes was noticed by her parents, but the doctor didn’t know the significance. At five months old, the health nurse was measuring how long Kathleen was when she noticed that she couldn’t straighten her left leg all the way. After an x-ray it was noticed that she had a lump in her leg from her immunization needles. The first specialist thought that she had myositis ossificans and at two years old she had surgery to remove most of the lump. After some months of physio therapy to strengthen her leg, the lump had grown back and finally at the age of four, we had a correct diagnosis of fibrodysplasia ossificans progressiva (FOP).

At age eleven, she went to visit Dr. Fred Kaplan in Philadelphia, who is one of the best FOP doctors around. As there is no cure at this time for FOP, we can only hope that research will find a solution in time for individuals affected by this rare disease.

Kathleen lives on a farm. She always enjoyed being around animals, whether it was baby chicks or newborn calves she always had to go see them.

She is now 18 and enjoys cross stitching, quading with her family, fishing, swimming, and spending time with family. She lives in Goodsoil, Saskatchewan, Canada and will graduate this year.

FOP has affected her life because she can’t walk like normal people can. Her legs do not bend at the knees. She can’t reach above her lips. She can’t turn her neck around as it is fixed in one position. Something as simple as putting on shoes is beyond her reach. Family plays an important part of her life.

She was glad to be able to drive a vehicle with the use of camera’s to act as her mirrors and the use of her Segway to get around school and to go longer distances as she gets tired from walking too far.

She got her first job this year and would like to take a medical transcriptionist course so that she could work from home.