Marathon weekend is here and was a huge success all around.

On Saturday we drove up to Boston with an unprecedented ZERO potty stops on the way. After lunch with an FOP community friend and her family, we took advantage of the gorgeous weather and completed our final two miles!! 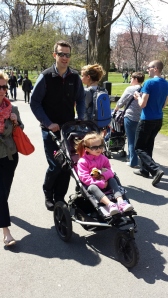 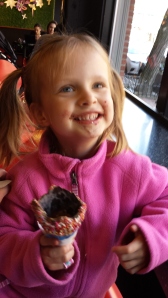 and the other part was towards the ducks in the park.

We didn’t leave time for our usually- enforced naptime, so we were a bit worried heading into the Genzyme Running For Rare Diseases dinner. ( We also didn’t leave time to check into our hotel and had to change clothes in our car, but that’s another story.)

The dinner was lovely, on the top floor of Genzyme’s Alston Landing facility with great views of Boston at sunset.

We had a few terrific highlights:
Meeting Kuber! He is such a terrific, positive person. He scooped Sienna right up and gave her a hug. She loved him immediately.

Meeting David Meeker, the CEO of Genzyme: He introduced himself just as Sienna took a huge sip of water. I saw her considering her options but before I realized which option she picked, she spit out the entire mouthful of water. Then she extended her hand and very carefully and seriously introduced herself as Sienna. She certainly knows how to make an impression!

Sienna’s second successful public speaking engagement: I was very kindly asked to be one of a handful of patient partners to give a speech, and I had Sienna and I give it together. I described how we completed a marathon in honor of Kuber and how Sienna trash talked me part of the way. Right on cue, she shouted “go faster, mommy!”

Meeting several terrific Genzyme employees, including Phil, the mastermind behind the whole program, and a few other patient partners.

We had a lazy Easter Sunday, and thankfully the bunny was able to find us away from home. 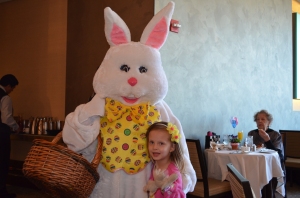 Then marathon day arrived! Incidentally, marathon day is also our 7 year wedding anniversary. 7 years ago today, we were wearing our wedding finery. Today, the three of us wore matching running for rare diseases shirts.

Sienna enjoyed hanging out with the genzyme crowd at mile 14 and fully took advantage of the sign making and bubbles and candy. They thought of everything!

And Sienna was ready to go! 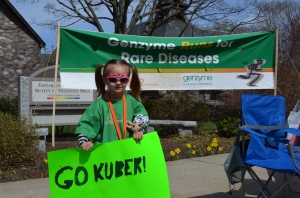 The marathon had a text alert system so we would know when Kuber was coming. We got an alert when he was at the 10k, so we camped out on the curb behind the cheerers and waited… and waited…

But our alert for the half was late, so we were still sitting 5 feet behind the cheering crowd when he came by. We were so disappointed. But we thought fast and took advantage of our training in advance. I scooped up Sienna and ran like mad, with rare dad close behind. We caught Kuber a couple of blocks down the road, to Sienna’s delight! And he seemed thrilled as well. Phew! I knew we trained for a reason!

Our alerts started working again, and on our ride home we got the alert that he completed the marathon right around his target time. We are so impressed!!

All in all, a hugely successful weekend. Thanks to everyone who followed along on our journey, and a huge thanks to Genzyme for including us in this year’s program. It was an honor to be included and a privilege to get to meet all of you!