This week Sienna and I had an incredible opportunity to be a part of the FOP Drug Development Forum, where representatives from pharmaceutical companies (who are actively working on FOP treatments) and the world’s experts on FOP gathered together to share information and collaborate, with the goal of developing effective treatments and/or a cure.

With a condition so rare (FOP impacts about 1 in 2 million people), you wouldn’t expect anyone to be working on it. But there are people. Really impressive people. LOTS of people. People from many different companies and research institutions all over the world. And they are all ACTIVELY working on treatments for FOP. I hope (and truly believe) that the amount of interest in FOP is because we are so close to finding an effective treatment for this debilitating condition.

Sienna loved hugging all of these wonderful people who are working on her “special medicine” (as we call it) and we loved getting to meet everyone and see a few favorites who we had met before. We were also able to participate in a patient panel, where 5 FOP patients/ caregivers answered questions about our lives, diagnosis, what we’d want in a treatment and the level of acceptable risk. A highlight (besides listening to the other patients, who really impressed me with their poise and wit) was being able to tell everyone that Sienna would like the treatment to be peach-flavored. She got a round of applause for that one!

Another highlight was Sienna getting to meet another FOP patient close to her age. He showed her that you could keep candy in your name badge, and she followed him around like a puppydog the rest of the weekend. Adorable! 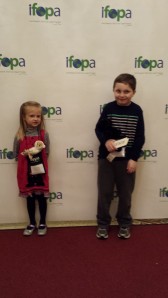 Sienna and I also had the incredible honor of giving a speech together to close the conference. It took a while to come up with what we should say. What would you say to a room full of people who are working to save your child’s life? What words would you leave them with to motivate them as they go on their way after the conference? “Thank you” isn’t even the tip of the iceberg.

I also wanted to find a way for Sienna to participate, since she is the real star of this show. She has done a wonderful job with two speeches we’ve made together in the past. I will tell her the topic and basic outline of my speech and see what she says about it. She usually has a very funny addition that I am able to work into the speech, which I then remind her of just before the speech, so that she can say it into the microphone.

I ended up deciding to share a little slice of our life: how we started out when Sienna was a baby, how our lives changed with her diagnosis, and our dreams for the future (which will be made possible by all of them).

I practiced my part quite a bit in the week leading up to the conference. My speeches always go better when I practice. But the part that I couldn’t practice for was the element of surprise that is always present with a 4-year-old.

This time, Sienna had two lines: “I dream of that day too!” in the middle of the speech and “thank you!” at the end. In the hours before the speech, I reminded her of her lines and she chanted them happily. We agreed that I would hold her for the whole speech and she could hold two stuffed puppies.

About 10 minutes before we were on, we entered the back of the conference room. A couple hundred or so people were in there, and Sienna wanted to run around and say hello to all of them. These were the new friends she just met! I had to explain that someone else was still speaking so we needed to stay quiet just a little longer. That didn’t go over well with her… We sat down in the back of the room. She told me her feet were hot and removed her shoes. She couldn’t figure out to best hold her puppies (she ended up bringing three). We decided that she could tuck them into the top of her dress. But only two fit. She tucked the third into the top of MY dress. Hmm… While cute for a 4-year-old, I wasn’t sure I wanted to speak in front of such important people with a puppy in my dress.

With two minutes to go, Sienna refused to put her shoes back on. Sienna told me she did NOT want to be held. We decided she could stand next to me and play with her puppies. But I DID get the puppy out of my dress without being detected.

Go time! Oh well, who needs shoes anyways? We walk to the front of the room, barefoot Sienna next to me. I put my notes on the clear podium and Sienna immediately discovered that the podium was open from the back and climbed in! That thought had never even crossed my mind! It was hilarious. She was happy as a clam in her little clear box, so I had to quickly weigh the costs and benefits: Was it safe? It appeared safe enough for the 10 minutes we needed – she could stand up exactly and have the top just about even with the top of her head. Could I give my speech with a little person in my podium? I guess so… Why not? Was it inappropriate to have her in a little display case? Maybe… but what the heck, she is there to be on display anyways! If I’m exploiting her in the interest of saving her life, so be it. Let’s go!

I think, while laughing hysterically, I said something like “Wow! Well that wasn’t part of the plan!” and then got started. Here is a visual: 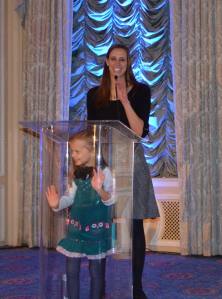 I’m getting the video clip to share, but in the meantime, here is the speech as intended (with the pictures shown on the screen), titled The Life of Our Dreams (I know, I wrote a blog post with that title before, but I like the title. This is different, I promise 🙂 ):

When Sienna was born, we lived the life of our dreams for almost two years. Sienna met or exceeded all of her developmental milestones. She spent every day at the local park, making friends and building a foundation for the healthy and active lifestyle we’d always dreamed of for her. She was independent and strong. One day she was toddling along holding a toy purse and a little boy pushed her down. She stood back up and whacked him with her purse. Not the ideal response, but I secretly cheered her for standing up for herself.

And I was on my way towards being the parent I dreamed of: giving her leeway to figure things out for herself, letting her fall down and get right back up. I wanted her to dream her own dreams and pursue them. I may have suggested Olympic swimmer, but I wouldn’t have pushed it…

At 21 months, during a naptime, Sienna started screaming. We didn’t know what happened. But two days later, I felt a giant goose egg on her head. Giant. The size of an actual egg. Her pediatrician noted it was impressive, but wasn’t concerned. Then a couple of days later, this happened.

We went straight to the ER and after a round of tests, we were sent home with a clean bill of health. It took several weeks, but it cleared up. Then a couple of months later, an everyday injury led to a swelling on her neck, which moved and changed, always hard as a rock, eventually becoming a shoulder the size of a grapefruit.

After another trip to the ER and weeks of more than 20 specialists, we got the diagnosis that changed our lives: FOP. A condition where any bump or fall can create out of control bone growth that could lock her in place forever. Our diagnosing doctor gave her a life expectancy of 20’s and sent us on our way. The details of that appointment are burned in my brain forever. My dreams were crushed.

But that night, we scoured the internet and learned about you. All of you. The work that YOU are doing.

And we went from devastated to hopeful.

If something could stop the progression of FOP, Sienna could still be able to live whatever life she dreamed. And patients who had locked joints could potentially be freed.

My dreams of Olympic trials became dreams of clinical trials.

We padded every inch of our living space. I became a continuous repeat cycle of “no running! be careful!”

And we had to watch as she endured a full year of continuous, painful flare-ups all over her back, shoulders and stomach.

We stopped bringing her to the park. We took her out of her gym classes. We pulled her out of all active or potentially dangerous activities. We did let her have fun and get messy in art classes, play with her stuffed puppies, and open her own playroom medical clinic. (For a while now, she has wanted to become a veterinarian AND a doctor.) But if it was humanly possible, we would have kept her wrapped in bubble wrap.

As she’s gotten older, she’s gotten steadier on her feet and become able to do more things herself, carefully and independently. We let her dance and twirl and even run (though that still makes me really nervous) on carpet, soft grass, or our favorite, the beach.

I am so proud of her, but remain terrified that her independence could be taken away from her by just one misstep.

My dreams for her future are back where they started, because of the hope that all of you have given me. 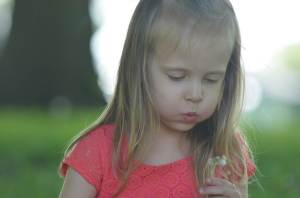 I dream of the day when my protectiveness is no longer needed. When I can stop yelling “be careful”.

(microphone to Sienna: “I dream of that day too!”).

I dream of where we’ll be and what we’ll be doing when we learn that an effective treatment is ready.

I dream of the day when I won’t have to hold my breath and check her for new bumps every morning.

I dream of the day when FOP is just going to be the topic of a really powerful college application essay about a challenge Sienna has overcome.

I dream of the day when Sienna will have opened the first pet AND owner medical clinic, and if she diagnoses a patient (or a pet, for that matter) with FOP, she can just say “Oh, I have that too. There’s a treatment available. And here’s how you get it.”

I believe my dreams are going to come true. I no longer tell Sienna “no” when she asks me if she can play on the monkey bars. I now tell her she just has to wait until her special medicine is ready.

Thank you all for joining us this week.

Thank you for giving us hope. And for ensuring that one day, the life of our dreams becomes our reality.

We received a standing ovation – did I mention these are the kindest people in the world? 🙂

I still cannot stop laughing about Sienna in that podium. Here are a few more pictures from during the speech: 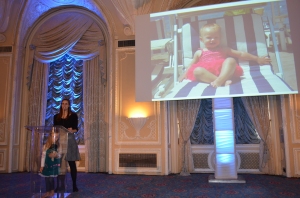 5 thoughts on “Sienna Makes An Impression”