2015 was a busy year – I recently received an email with a review of my blog posts from 2015 and was surprised that there were only two! I’d definitely intended to post more and in fact had several half-finished posts waiting in my drafts.  So here are some highlights from the second half of our year, all at once!

By the end of summer, Sienna was going to day camp like every other kid.  Sure, this doesn’t sound that impressive to hear or even to see, as Sienna looks like a typical 5-year-old.  But Sienna has FOP (Fibrodsyplasia Ossificans Progressiva), a rare genetic disorder where muscles and soft tissue progressively turn to bone, restricting movement.  Trauma such as falls can cause flare-ups and speed up the ossification process.  Needless to say, Sienna doesn’t always get to act like every other kid and an event like going to camp doesn’t happen by just enrolling her and dropping her off.

Sienna’s road to camp started last winter when we discovered our local YMCA.  We were looking for swim lessons that could accommodate her needs and found a 1:1 swim instructor at the Y who was happy to work with us. I walked in on the day of the first lesson intending to sign Sienna up for regular lessons if it was successful. But after the lesson, meeting the warm and welcoming staff and seeing the facilities, we walked out with a full family membership.  Sienna had been enjoying her lessons on the weekends and the family swim time with me (Bonus, there is also a special needs family swim on Sunday mornings where we practically get the pool to ourselves!).  So I was excited to learn that the Y also offered summer camp programs – a new group of friends, lots of high-energy counselors, crafts, special guests, more play and swim lessons EVERY DAY!

Signing up involved the usual things all parents need to do such as the camp backpack, labeling every item, packing lunches, and then also the extra stuff we need to think about with FOP – Sienna needs a 1:1 aide with her at all times, she takes medication before lunch, and certain activities are off limits (like monkey bars and soccer). After great preparation work between me and the camp directors and a few extra forms, we were ready to go.  At the beginning of the summer, we were able to have our caregiver get cleared to attend camp with her.  But towards the end of summer we were facing a gap in care (we made it through by both taking a few vacation days, and fill-in efforts by Sienna’s grandparents and by Sienna’s beloved nanny from Texas flying out to help.)  But we really, really didn’t want to take Sienna out of camp because she was enjoying it so much.  I sent a note asking the staff if there was any chance of an extra counselor who could fill in as Sienna’s buddy during camp if we reduced her to half days for the final two weeks of summer. (Sienna tends to fatigue easily so I felt it would be better to have her come home before she was at risk of getting clumsy or cranky while with a new buddy).  I recognized that this was a HUGE ask and told them not to worry if they couldn’t help (but that I had to ask and give it a try! J ), and also offered that we’d be more than happy to pay extra for the extra attention.   I almost didn’t ask the question because it felt like such a momumental ask.  But do you know what the YMCA did?  They found a counselor that Sienna had already bonded with to be her buddy!!!!  At no extra charge. Talk about exceeding expectations!

So Sienna unexpectedly got to attend a real camp like a regular kid!  This ended up being her first experience not having the home-person also be her aide during the day, which is something I’d really been looking forward to for her development (having a nanny at school is kind of like bringing your mom to school), and a test run for Kindergarten where her aide is provided by the school district.  It was also such fun for me to get to do camp drop-off that final week.  Sienna looked so proud of herself being taken out of the car by the counselors and walked to her group, just like every other kid. Thank you, YMCA! 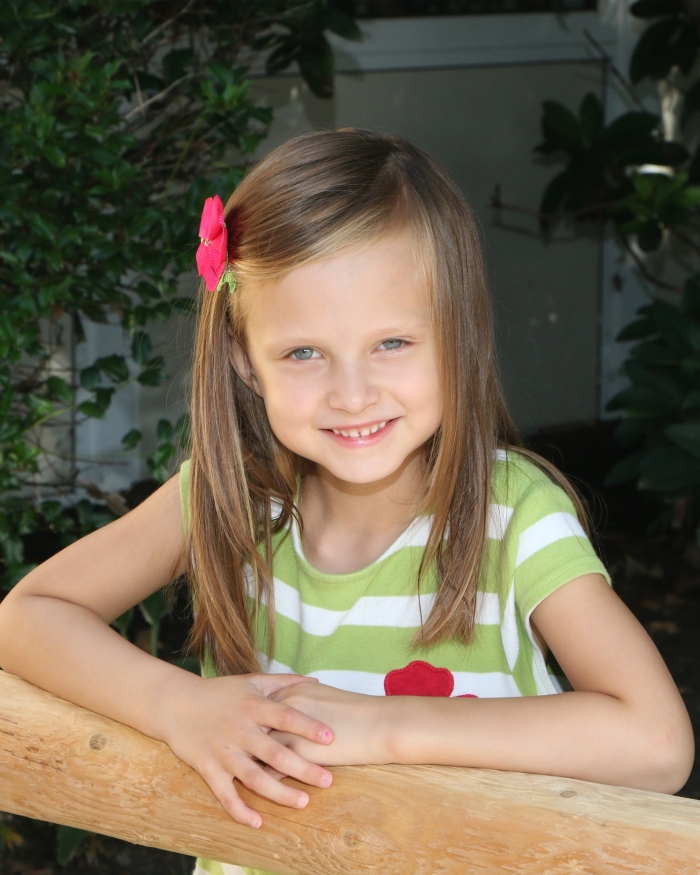 This fall marked the start of Kindergarten!  I started out a bit nervous.  Will Sienna’s new aide be able to keep her safe?  Will the teachers and staff be welcoming?  Will the other students understand that they shouldn’t roughhouse with her but other than that, treat her as a regular classmate?

Starting school also is not as easy as signing up and dropping off.  Our school process started in the spring with a 504 meeting made up of the school principal, psychologist, a kindergarten teacher, a social worker, her occupational therapist and a few other folks to determine her 504 plan.  A 504 plan is a plan developed to ensure a child who has a disability gets the accommodations they need to access the learning environment. I went in with my giant pile of papers and a doctor’s note, prepared to hold firm that she needs a 1:1 aide.  Luckily that was a non-issue as the committee took it as a given that she would have an aide and went beyond to discuss how to handle recess, safety in the classroom, etc.  We determined that Sienna will skip Gym class and instead have extra time in computer lab, help take care of the school turtles and fish.  At recess, her classmates also take turns accompanying her in safe activities like coloring and computer lab, which seems to be working well for everyone.

In a new situation, there is always something you don’t anticipate, and in the first week of school Sienna told me she sits on a stool in art class and that the lunchroom has picnic-style tables.  Since Sienna’s back has some fusion, if she sits in a chair without a back and loses her balance, she goes down like a tree.  So, one note back and forth with the school nurse and Sienna was able to pick out her own pink padded chair with a back and arms.  2 of them actually, one for lunch and one for art, that she will be able to use for all 6 of her years at the elementary school!

As for her acceptance and integration into the school, that was a non-issue as well.  When the school year started, the principal helped share information about Sienna to all of the parents on back to school night, Rare Dad and I said a brief couple of sentences to the parents in Sienna’s classroom, and the principal gave an abbreviated version of the FOP Classroom Talk to the entire school.  While we struggled a bit with the entry into preschool last fall, this year it was smooth sailing.  The school and parents in the community thanked us for our open-ness and I think the other students of all ages now view Sienna as their own little sister to look after.  Sienna’s school has a Halloween carnival and walking around with her was like walking around with a mini celebrity, even though she’d only been there less than two months!  The students would call out “Look, that’s Sienna!  Hi, Sienna!!!!”  Sienna can be a bit shy and would try to hide, but I can tell she does like it.  As we left the fair, there was a group of older girls gathered by the school sign, and I thought “oh no, is this a group of mean girls..” but instead they smiled and called out “Bye Sienna!!  We hope you had fun at the fair!”  Huge relief and we are so thankful to the school and to the parents for raising such caring kids.

Sienna has also thankfully bonded very well with her aide.  A few weeks into the school year at bedtime I said “Sienna, you’re my favorite person in the world!”  And Sienna replied with “Mine’s Miss Ashley”.  I wasn’t even jealous, just happy that she is happy at school!

After a smooth transition into school and the FOP worries under control, Kindergarten has been a great experience for Sienna.  Her amazing teacher has helped motivate her start to read on her own, drastically improve her writing and drawing skills, and even improve her manners!  She has even had a few playdates with new friends!  Though the school day is long (8:30-3:00 every day) so we have recently backed off from after school playdates because she was getting too tired.

FOP Research Progress:
2015 was also a banner year for progress in FOP research with a key discovery made by the Regeneron team, the enrollment of children as young as 6 in the clinical trial of Paloverotene, Vanderbilt and La Jolla Pharmaceutical Company entering into a research and licening agreement, the launch of the IFOPA patient registry, the enrollment of children in the Natural History Study, and the announcement of the winners of the IFOPA Competitive Research Grant.  Check out http://www.ifopa.org for the full stories!

With the holidays approaching, we were all ready for a break.  Sienna’s break came earlier than expected, though.  The Tuesday before Christmas, her class had a gingerbread house decorating party.  I was surprised when she asked to leave early, came home and went directly to sleep.  We tried to wake her for dinner and discovered a 102 fever. She ran a fever for almost a full week, including Christmas day when she groggily tore through a few presents and then lay back down for a nap.  If even Christmas couldn’t rouse her, we knew it was bad!

It turned into a full week of fever – napping, lying around, watching TV, hardly touching food, and snuggling – topped off with a burst eardrum and weight loss of about 5 pounds, which she did not have to spare.  We took her in to her pediatrician first for the fever, second for the ear, and then for a check up on the ear.  We will probably have one more check in on the ear, but she is finally acting like herself again.

Side note – while it always makes us worried, sick Sienna is one of my favorite Siennas:  calm, snuggly, and sweet.  I never get to fully enjoy sick Sienna because by the time she’s well enough for me to feel calm about it, she’s back off and running!  But we did have some great snuggles and I was glad she was sick while I was home from work.

With the virus finally in retreat and the ear on the mend,  2015 did go out with a bang.  On New Years Eve some good friends stopped by for breakfast and I sliced my thumb open while cutting a bagel. I think the full week without consistent sleep, sleeping on Sienna’s floor worrying about the virus/ear caught up with me and I was distracted. When my thumb was still bleeding two hours later we decided it was time to get help. Luckily our local urgent care handles lacerations so we didn’t have to go to an ER.  And even better,  they were able to glue it shut rather than stitches!

Most importantly, 2015 was our second full year of keeping FOP flare-ups away!

Now we are all almost good as new and ready to take on 2016.  Can’t wait to see what this year has in store for us and for FOP research.  We hope that 2016 brings good health and happiness to all of you – thank you for your friendship and support!

One thought on “Catching up”