By nature, I am a packrat. I form sentimental attachments to things and keep them forever. It’s not just “stuff” to me, it’s memories. However, I also move a lot. A LOT. We’re talking at least 21 moves in my lifetime. 13 moves since college. 3 in the last two years.

For much of my adult life, each move was about getting to a slightly bigger space and acquiring more stuff. Nicer stuff. Getting rid of old stuff each time, but keeping much of the old stuff too. I got married and bought a house in Texas and registered for even more stuff to fill it up. Fancy kitchen stuff made to prepare meals we never learned to cook. Fancy serveware for entertaining guests we never had over. Decorative stuff to show… each other? Formal china for I don’t even know what reason. Maybe for when the queen comes to visit?

I mean, seriously. I bought fancy vases that I filled with colored glass rocks. I paid good money for vases of rocks and put them on our mantel and looked at them and was happy about this.

About 3 months after buying our Texas house, we sold it and moved to Dubai for Rare Dad’s job. To a place where the plugs didn’t work for all our fancy new American kitchen appliances. But that was fine because we probably weren’t going to make our own homemade ice cream or steam our own veggies anyways. We wanted to try the local restaurants. But still, we lugged our new pile of stuff halfway across the world. And then, just a few months later, better opportunities came up in Dallas, and we lugged it all right back (including, of course, our new pile of “Dubai stuff”).

Back in Dallas, we rented an apartment in the “cool” part of town, then upgraded to a house when were expecting a baby. Even with the house, we still needed a storage unit because I just couldn’t part with all of my stuff. (It’s definitely MY stuff – Rare Dad is a minimalist)

Then, in 2012, Sienna was diagnosed with FOP (Fibrodsyplasia Ossificans Progressiva – a rare condition that causes muscles to turn to bone, progressively restricting movement. Bumps and bruises speed up the process and must be avoided. Adults with progressed FOP are essentially frozen in place and need help to even get themselves around. I doubt they would want to waste their precious energy tending to so much stuff).

So after Sienna’s diagnosis, I looked at my stuff with brand new eyes. Every time we move, it’s a physical workout of packing, moving, and unpacking the stuff. Even with “full service movers,” I always end up with bumps and bruises from the unpacking process. And once I’m done, I end up with a houseful of stuff to take care of. Stuff that I have to arrange, fit into cupboards and maintain. Stuff that I need to keep in storage units, where I open the boxes every year or two, reorganize them, and pack them back up. For what? To be able to look at it again in two years? To sleep well knowing that I still have t-shirts from every swim meet, fun run, and college event I ever attended?

Some stuff, I totally get. Pictures. Favorite treasures. I don’t regret for one second that I still have my favorite childhood toy, “puppy,” and I do lament that my “pink baby” is nowhere to be found. But what about the rest of the stuff?

Lately, I’ve come to realize that I don’t own this stuff. This stuff owns me.

We’re currently planning our third move since Sienna’s diagnosis last year, and with each move, I have freed myself from a little more stuff. Ok, a lot more stuff.

Our first post-diagnosis move was a hastily-chosen apartment, because our house was not safe for a wobbly 2-year-old who was no longer allowed to fall down. Whoever invented a sunken living room anyways? An ER doctor with a slow business? We moved to a small, carpeted apartment that we could FOP-proof.

As I packed, I looked at that vase full of rocks and realized that I had lugged around A VASE FULL OF ROCKS for 6 years. I had packed and unpacked that vase full of rocks at least 4 times. I had dusted that vase full of rocks. Not as often I should have, but I did. That is time I could have spend doing something else. Anything else. So that pile of rocks went into the trash. (I kept the vase, by the way, we all know how much Sienna loves flowers.) And I donated an entire roomful of stuff to charity. Not just one furnished room, but a room filled, wall to wall, floor to ceiling, with stuff. Furniture, clothes, extra kitchenware, more baby gear and toys than you can imagine.

We switched apartments a couple of months later to a nicer one, and when we did, we donated another several carloads worth of stuff.

Now, one year later, we’re moving across the country to New York (https://raremom.com/2013/08/13/ny-here-we-come-also-a-love-letter-to-dr-pepper/) and we have rented the tiniest house we could find – 900 square feet, but we can walk to the beach so we won’t be inside much anyways. And I am getting rid of as much stuff as I can. For me, stuff is so loaded with memories, and the past year of our life has been loaded with moments I’d rather forget:
– A box of invitations to Sienna’s second birthday party at the Little Gym, which we had to cancel because we were in the hospital with her instead, her shoulder the size of a baseball? Gone.
– A tutu and ballet shoes that Sienna never got to wear because we had to cancel her classes after she was diagnosed? Gone.
– The dining table and couch where we sat night after tearful night, papers strewn everywhere, desperately searching the internet for hope of a cure? Gone.
– Over 100 sympathy cards we received when Sienna was first diagnosed? They were so nice and so appreciated at the time. But do I want to be reminded of that time in my life? Nope. Gone! 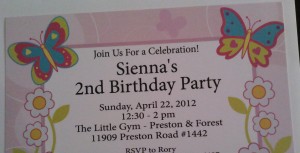 And then there’s the other stuff, the stuff that’s owned me for years. Nearly every birthday card I’ve ever received. Notes passed from high school friends. Clothes I haven’t worn in years. Clothes I’ve never worn. Books I read once, years ago, and put on a shelf. I’ve kept a few of each of the above – the good books, family birthday cards, the really nice cards and letters. But the bulk of it? Gone. Gone. Gone. 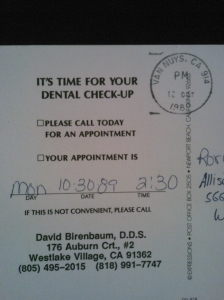 Stuff, I am breaking up with you. It’s time for a fresh start.

I’ve just bought some new stuff for the new house. This is going to be the good stuff.

This is the stuff we will be living with when we learn that Sienna’s future is going to be ok. Maybe we’ll have people over to celebrate, and maybe someone will spill wine on our new rug. I’ll keep that stain forever, because it will be a happy memory.

Help us make these amazing new memories by visiting http://www.siennasflowergarden.com.

And once we’re settled, please do come visit us. But don’t bring a housewarming gift. Unless it’s something practical. Like cookies. Or wine.

What about all of you? Do you own your stuff? Or does your stuff own you?

3 thoughts on “The Stuff that Owns Me”